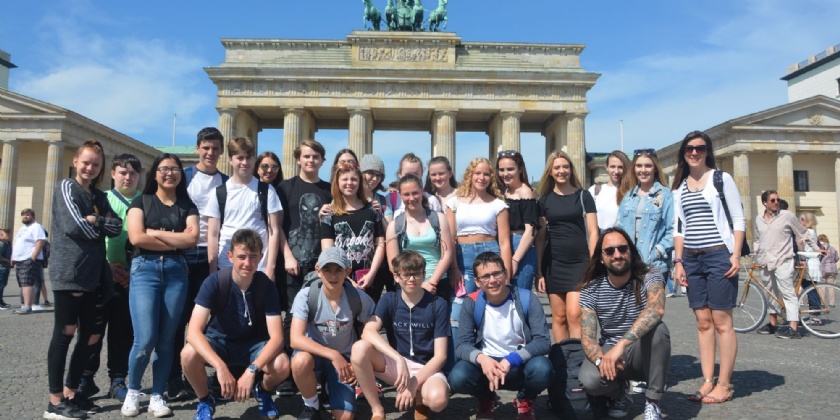 As one of our many educational excursions organised by the College; twenty-two students and three teaching staff set out to visit Berlin just before the half term, as part of an immersive three-day history trip.

Events that our students had been reading about in textbooks were now coming alive around them in the capital city. On our first full day in Germany, our trip started with visiting the iconic Brandenburg Gate. Led by our fantastic tour guide Sam, students learnt about key moments in history, from the rise of Germany to the rise of the Nazis. Standing outside the Reichstag students got to stand in the shoes of the leaders who took Germany on the rollercoaster ride of the 1920s and 30s and Sam, our tour guide, helped them unpick how people at the time could vote for Hitler to be their leader.

By travelling to key sites throughout the city students got to witness and understand first-hand the severity of Hitler's regime by stopping to visit several of the third Reich memorials located in the government district. These included the Memorial to homosexuals persecuted under Nazism, the Memorial to the Sinti and Roma and the Memorial to the Murdered Jews of Europe, a staggering and thought-provoking structure consisting of 2711 concrete slabs of different heights, located in the heart of Berlin.

Later that day we moved on to the amazing, German Museum of History. Once an armoury it now houses a range of fascinating artefacts from different periods in Germany's history. Our museum guide showed us a range of items from Weimar and Nazi Germany including various propaganda posters, toys, an identity book and even Hitler's enormous desk.

Having been completely bombarded with information the students had an evening of fun at the iconic TV tower. Built by the GDR from 1965-1969 the tower gives spectacular views across the city and students could begin to piece together all the places they had visited that day.

The following day staff and students toured Sachsenhausen memorial centre, one of the biggest concentration camps on German territory from 1936 to 1945, located in the small town of Oranienburg. This camp housed around 200,000 inmates who were enslaved and exploited as forced labour by local industry. this is where several tens of thousands of prisoners died, as a result, the inhumane working and living conditions, brutal treatment, or were gassed, shot or subjected to medical experiments. Visiting Sachsenhausen was a deeply emotional experience and everyone from Crookhorn behaved with the utmost respect and all left with their own profound reflections.

Our next stop on our tour of the capital was the outstanding Olympic Stadium; getting to sit in this grand and ginormous stadium was a sight to be seen. After learning about the stadium, its history and the athletes that had competed there our group headed back to the Reichstag and visited its iconic glass dome and roof terrace, just in time to see the sunset over the Berlin skyline.

On our final day of the history trip, we moved on to look at some of the key events in the Cold War. Starting the day with a discussion about how WW2 ended students were able to see how Berlin, and Germany, were divided by the allies and began to understand the consequences this had on them. The day started at the Allied Museum where, in an old American cinema, students could learn about how the Berlin Blockade and airlift affected the Berliners between 1948-1949. From there, students understanding of the tensions during this period developed further and we were able to visit two sites which focussed on the building of the Berlin wall. The Berlin Wall memorial not only gave students the chance to see some amazing footage of the construction of the wall but also enabled them to view a remaining sector and see the scar that was made through the city when it was put up.

After a trip to one of the many ghost train stations that were bricked up and closed on the building of the wall, our tour ended at the Palace of Tears. Set at one of the crossing points between East and West this museum gave students an insight into the difficult partings and excited re-unifications Berliners faced when they were trapped within the Cold War tensions and political disputes of this era.

An utterly exhausting, exhilarating and fascinating trip but one which we hope has built memories to last a lifetime. A HUGE thank you to all the students, staff and our fantastic tour guide Sam for such a memorable and engaging experience trip to Berlin.