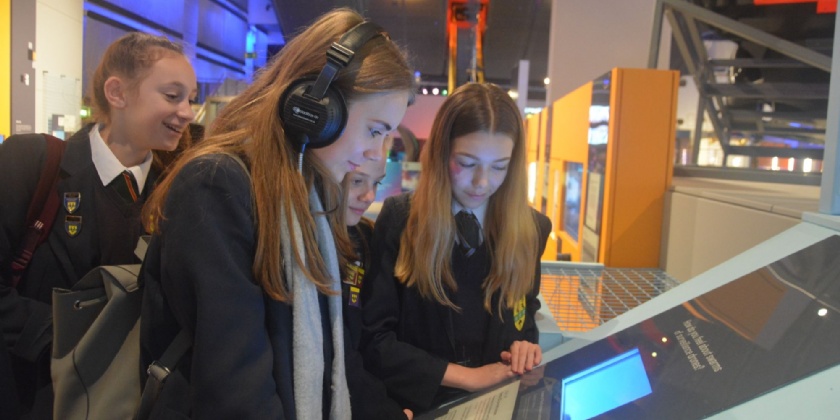 This month I would like to start my blog with a special mention to one of our community’s longest-standing and most dedicated members. Vernon Petherick has been a governor of Crookhorn College for 45 years and has just celebrated his 90th birthday. Vernon became a Governor of Crookhorn School in 1975 under the Headteacher of Winifred Field just 8 years after the school’s creation. In 1982, John Adams became Headteacher and Vernon became his chair of Governors. The two had a fantastic partnership leading and guiding the College for 20 years. On the retirement of John Adams in 2002, Vernon went on to support Grahame Sammons, the new Headteacher, as chair of Governors for a further 10 years. Vernon was part of my appointment to Crookhorn in 2003 as Assistant Headteacher, and he formed part of the panel responsible for my appointment as Headteacher in 2016. In 2012, Vernon was duly recognised for his services to education with the award of an MBE from the Queen.

I have worked with Vernon for sixteen years and throughout this time I have been consistently struck by his professionalism, dedication and commitment to education. Since becoming Head, he has offered me unstinting levels of support and encouragement and he tells me frequently of how proud he is of the College and the journey it has taken over his 45-year connection with it. 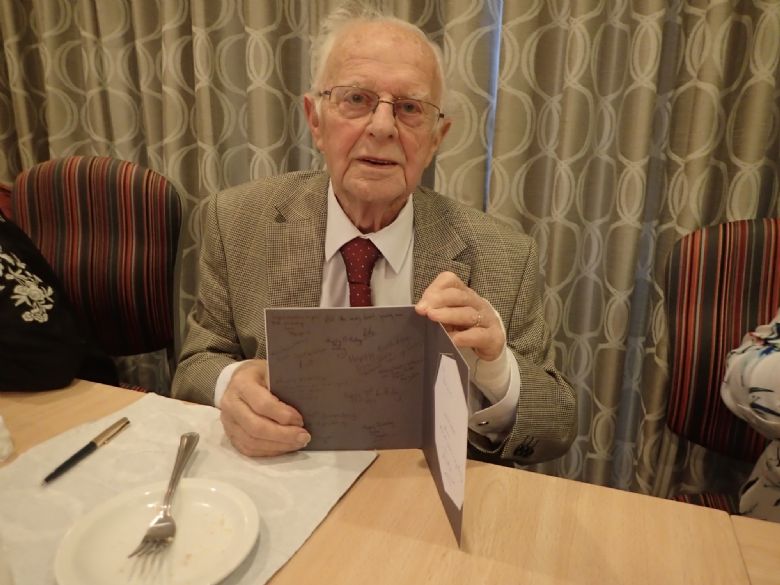 For me, Vernon epitomises all that we strive for through our Cornerstones. His sense of social responsibility, his selfless commitment to his local community over such a sustained time and the respect he has inspired amongst his fellow governors and leaders of the College are an example to us all. I am delighted that Vernon remains an honorary member of our Governing body and hope that he will be able to attend many more College events and celebrations.

As is standard for the College now, November is a time of intense academic activity as we have the mock exams for Year 11. This year we introduced a change based on student feedback from last year. This November, we have just done mock exams for the core subjects of English, maths and science as well as for subjects where there are January entries such as child development and engineering or where the final elements of the course need to be completed during the early spring term, such as photography and art. Full mock exams for all subjects will take place in late January and early February when the majority of the courses have completed their curriculum. It makes sense to give the students the best possible exam practice in their subjects once the majority of the curriculum has been covered. We will be taking feedback from the students again this year, to see if this format of examinations supports them better in the preparations for the summer final exams.

Following the exams I know the teachers have planned in a significant amount of feedback time as with our new curriculum structure, we have more flexibility this year to give time to feedback and reteach, making the purpose of the mock exams even more valuable. As I always stress to students, the mocks are essential to understanding where knowledge and skills are strong, and where there are significant holes. Armed with this, it can be a productive partnership going forward between teacher and student, to target the weaker areas to make them strong, ready to be tested again in February for the final preparations before the summer exams.

I still get frustrated with those students who proudly inform me that they have not revised, because it is only practice exams and so they do not really matter. Where would Lewis Hamilton be or Andy Murray, if they just rocked up for the final race or the actual match without the practice, practice, practice beforehand? Exactly! We all know it - they would be no-where! This year, I am pleased that there has been far less of this, and those who have clearly done no work and therefore significantly underperformed in their exams have been required to sit them again on Friday afternoon. Sometimes the message has to be quite blunt with those who believe they know better than the staff who have the experience and who have spent the time carefully planning the final months of preparation. As always, parental support at this time is so appreciated, so I would like to thank all the parents who are working so proactively with us, to deliver the consistent message that hard work does indeed pay long-term dividends.

We have had two other very important events in November. Firstly, at the beginning of the month, we had our whole College Act of Remembrance. As the College is now at complete capacity, this involved a significant logistics exercise, as we needed to fit up to a 1000 people into the Sports Hall. The new Vicar of Church of the Good Shepard, Janette Smith, presided over a deeply moving service, which involved reflection and the concept of forgiveness. In her talk, Mrs Masson described how the Treaty of Versailles in 1919 was meant to be the agreement that ended all wars, but due to the lack of compassion and a driving force of vengeance, it became the cause of an even bigger global conflict just 20 years later. 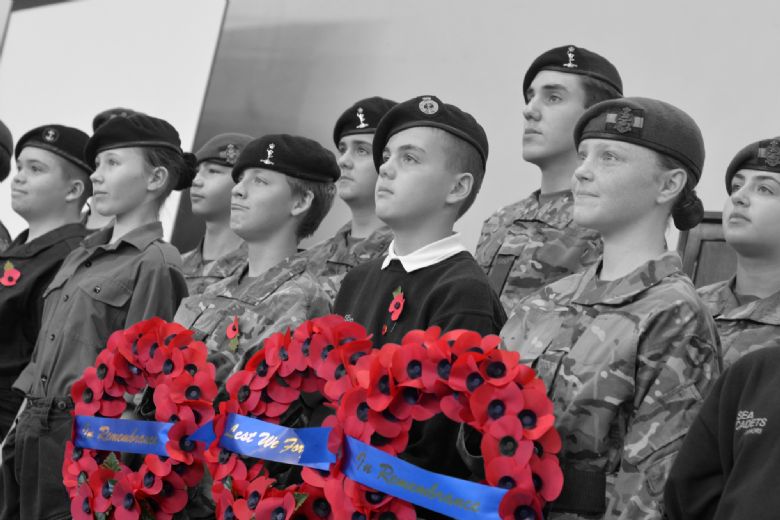 As 2019 also marks one hundred years since the first silence was observed on Armistice Day 11th November 1919, we reflected on the need for our understanding that Remembrance is not just about those who lost their lives, it is about those who continue to live in the shadow of their experiences. This year a significant focus of the Royal British Legion’s Poppy Appeal has been about their work through recovery centres, art programmes, and the Invictus Games to enable veterans to ‘Live On’. It is vital that we use our understanding and respect for their sacrifice to help us build a more tolerant and inclusive society. I am also so proud that 20 of our cadets, guides and scouts came in uniform and played such a central part in the service.

The second event was Hobbies and Interests Day. Like last year, the Year 8 students were very well prepared for it and once again, I have been left bowled over by the talent we have in the College. The two winners Faye .M and Cameron .B were both exemplary in the way they presented their hobby and their achievements, which is ultimately why they won, but the commitment and perseverance they have undoubtedly invested in their hobby is also admirable as it was for other House winners. At the end of the event, I talked to the students about the importance of not giving these hobbies up. These are things they enjoy and are important to their ongoing development and personal growth. When times get tough, it is often the hobbies that provide the relief and at the same time builds the resilience to help get one through. Too often teenagers take the easy route and stop what had once been their passion. We all need to encourage them to keep interested and keep committed!

No blog would be complete without a quick mention of some of the enrichment that the College provided over the last few weeks. Mr Bezant took another trip out, this time to Harry Potter World at the Warner Studios. As the workshop this year focussed on costume design, Mr Bezant collaborated with Mrs Pitassi to build enrichment into the new textiles course as well as developing creative thinking and writing for English. 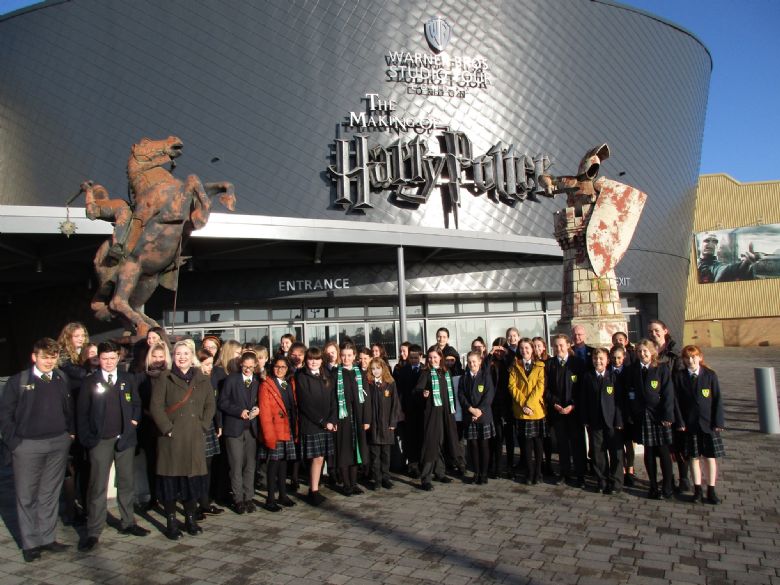 Mr Bailey took a group of Year 8’s to London to the Science Museum, whilst Mrs Masson took the politics club up to London to visit the Supreme Court and the Houses of Parliament, as a precursor to the mock elections that the humanities subjects are planning to run in early December before election day on the 12th!

Finally, I would like to thank all the parents who came to our PTA quiz night. It was the biggest event to date and raised almost £500 for College equipment. Thank you as well to Rob Clayton who ran the quiz, Marie Potter, our new chair of the PTA who organised the event and Julie Bridgen our chef for wonderful lasagne dinner.

Here comes December- with our Winter Show, Christmas Science lecture and staff panto. So much to fit in, in just 3 weeks!