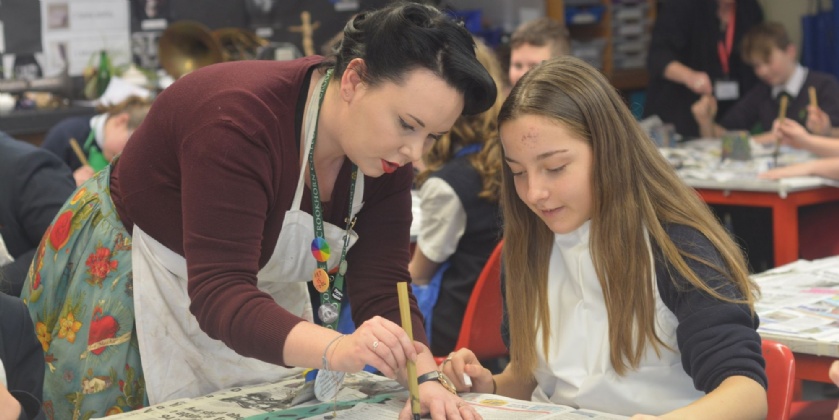 This time last year, I was beginning to look into what makes boys tick as far as learning is concerned because I was so worried about their lack of application to independent study and their fundamental lack of ambition. As part of this, I interviewed some boys who were then in Year 10, to try to get a better understanding of what the issues were. Alarmingly, we discovered through these interviews that there was a lack of comprehension about ambition altogether. However, I also made three other deductions that I summarised as such:

“I have interviewed quite a few boys now, mainly in Years 10 and 11, with Mr Collins, to see if we can unpick any small measures that can be put in place to help them realise what academic ambition is and how to go about realising it. Firstly, we have ascertained, that boys frequently live in a ‘here and now’ bubble and do not connect current actions with future choices. Secondly, boys are very motivated by their stomachs. If they are hungry at the end of the day, then their first motivation is to get home, raid the fridge and following that they then fall prey to the temptations of the XBOX or YouTube. Thirdly, boys are overwhelmingly positive most of the time, to the extent of being unrealistic, about what they are capable of without any knowledge or skills input. It is a confidence which if harnessed correctly could see them fly; if left unchecked, leads invariably to disaster and disappointment.”

I went on to talk about the ways we, as a College, planned to address the conclusions above, and over the last year, we have worked hard to bring these plans to fruition. Firstly, we applied for and were successful at getting a grant from the charity ‘Magic Breakfast’ that enables us to lay on free breakfast every day for any student who wants it. This means that students have fuel for learning at the start of the day. Secondly, we set up the study club after school for Year 11 boys initially, but this academic year we have expanded the group to include girls, where not only is supervision provided but also food… free of charge! This encourages students to stay behind after College to get on with their revision and staves off the hunger and hence the urgency to get out at 3.10pm. Once out in the wide world, we know that the levels of distraction make it almost an impossibility for some students to turn their focus back to learning.

Thirdly, in September, Mrs Wilson, our Careers Manager, set up an Ambition Group, for targeted Year 11’s whom we felt might have a lack of understanding about the concept of ambition. Over a 7-week course, Mrs Wilson did a variety of different activities with the group to grow their sense of self-perception and confidence. The success of this has been that every member of the group, alongside all other Year 11s in the cohort, have now made an application to College for their post 16 education and most have secured a conditional offer. It is brilliant to have achieved this by this point in the year and it has given many of the boys, in particular, a sense of future. This is so important when it comes to motivation.

Finally, we have continued to work with teaching staff on the concept of reteach, to secure understanding: ‘live marking’ to enable swift response or positive affirmation of work and since September a real drive on the quality of writing. This last aspect has focussed on planning, drafting, redrafting and the use of subordinating conjunctions to extend sentences and improve academic writing. 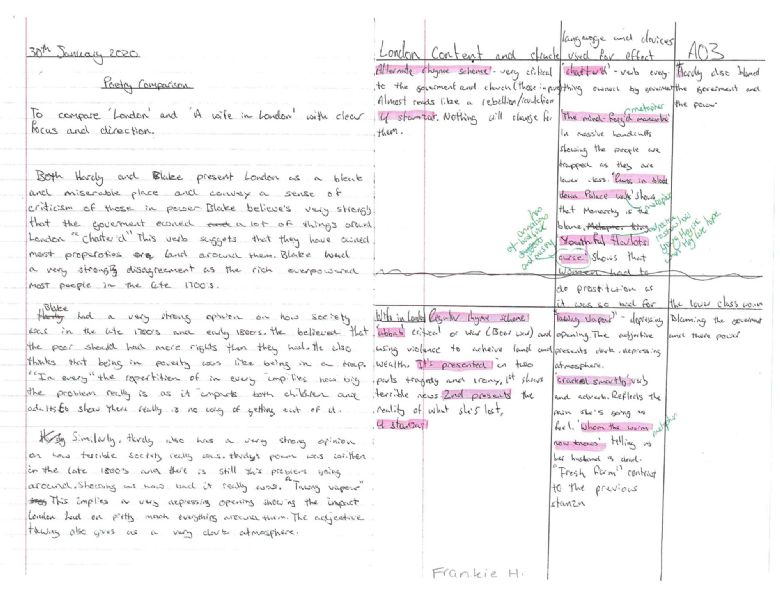 This week I visited a Year 11 English lesson, which is part of my normal rounds looking at progress and the quality of students’ engagement and learning. The class is predominantly boys and many have not found learning or writing specifically easy. The level of engagement and confidence in the lesson was excellent, considering they were focussing on a comparative piece of poetry writing which has traditionally not been an area of strength for Crookhorn students. The quality of writing was what impressed me most though. The use of literary devices such as subordinating conjunctions to enable comparative analysis demonstrates such progress from this time last year that I got copies of some of the work to share with my leadership team. To me it proves that boys can do it, they write well when they put their minds to it and maybe some of our focus on helping them is beginning to pay off! I have attached two examples to the end of my blog. They are not perfect pieces of writing, but they demonstrate a commitment to learning, an ambition to improve and the impact of reteach, live marking and careful planning. Many of these aspects were absent from these boys last year. I do not have a crystal ball, and we know anything can happen in the exams, but this lesson and these boys made me remember why we do the job we do. 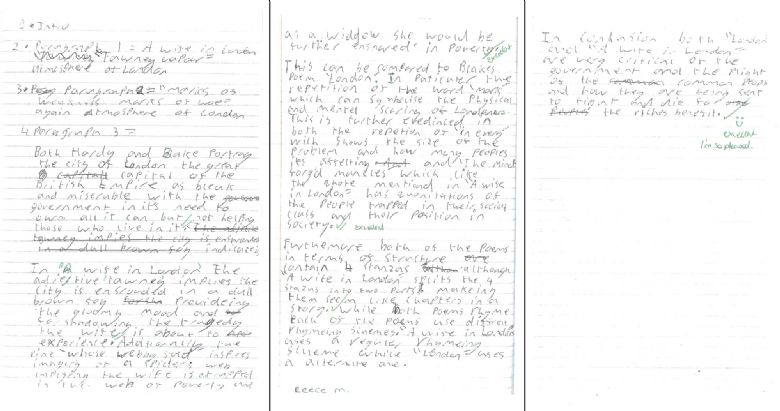 On a quick round-up of our enrichment and extension opportunities in January, Year 10 had a very successful MADE training day, focussed on the concept of ‘study made simple’. They have many strategies to take forward from this and to put into action over the next year, to increase the effectiveness of their study through simple steps. If they apply themselves to this task, then this time next year they will be confident going into their February mock exams, having already secured a top grade in their early entry exam in the summer term. This is obviously my expectation! Ollie Hawkins from Pompey Football Club came and spoke to this year group as well about motivation and the need to understand that success is a self-fulfilling prophecy.

For Year 8 we had a fabulous Chinese Cultural Experience Day, exploring some of the culture of this vast and historic country. The day was timed to coincide with Chinese New Year, which is an increasingly international celebration. The students seemed to really enjoy the immersive experience and the opportunity to try out new skills and techniques such as Chinese brush painting (a number I saw were great at this!), Tai Chi and Chinese dragon and fan dancing. 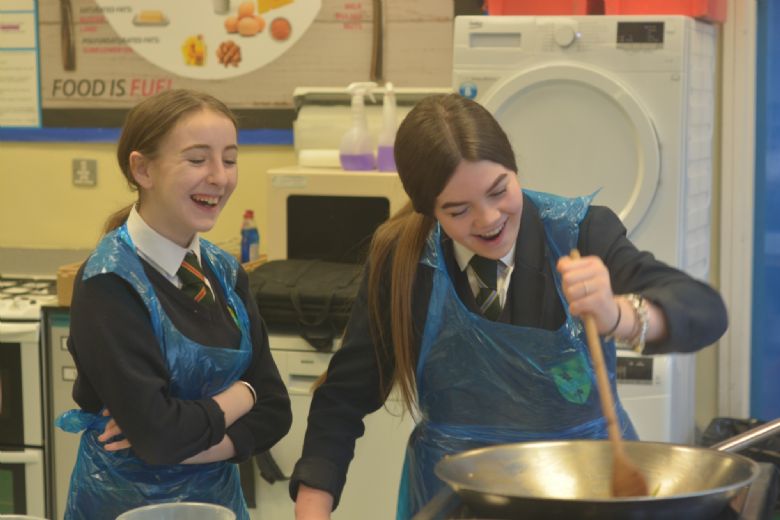 Three teams of students from Year 7 to Year 10 took part in the Rotary Club debating competition. This is a record as far as Crookhorn is concerned for the number of students involved. Miss Masson said that their performance was excellent. They presented well thought through, coherent and cogent arguments. They also took on board key learnings for the next round, such as trying to do as much as possible of the initial presentation, without notes. If you think that these presentations are 15 minutes long each, that is a great challenge to set yourself.

Just yesterday as part of the English Department’s ‘Opening Doors’ initiative to provide stretch and challenge, Mr Bezant took another trip out to the West End, this time to see ‘Phantom of the Opera’. His description of how the show is presented required the use of the adjective ‘mind-blowing’, so I am hoping the students really loved every minute of it. I will catch up with some of them next week, to get the full low down!

As I write this blog, Year 10 have just left us for two weeks’ work experience in the big wide world and Year 11 are about to start their mock exams on Monday. Welcome, February!