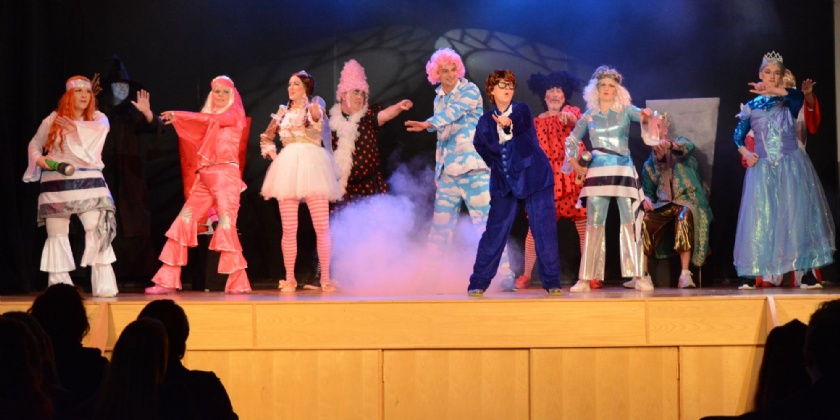 I am delighted that we were able to finish our term with as many of our events in place as possible, despite the rapidly increasing rate of infections. It certainly gave a vastly improved feel to the end of term, over the rather bleak end in 2020. In line with the drive to really build the extra-curricular back up to enhance the educational experience of all our students, the staff planned and delivered on a number of great events or educational activities that extended the curriculum offer for students.

On the first Monday of December, we celebrated the Winter show. Now the arrangements for this did have to be modified to try and keep all participants and the audience as safe as possible. So instead of the local primary schools coming in, followed by a performance in the evening, we put the show on for the whole of Year 7. These students would not have had the chance to see the show when they were in Year 6 due to the restrictions in 2020, so they absolutely loved having the opportunity this year. The Performing Arts team of Mrs Callaghan, Miss Grundy and Mr Armstrong were so proud of all the performers and how well they responded to the change in the plan. They were also delighted by the enthusiasm of the Year 7 audience. Both teachers and students across the whole College are fired up for future performance projects and of course we have the highest hopes of running a full summer production! 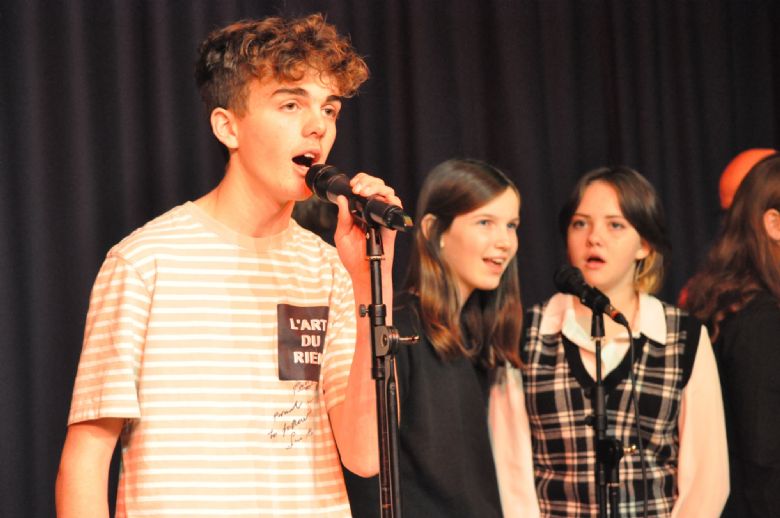 On the Tuesday, in the midst of Storm Barra, Mr Bezant bravely set forth with 27 of his Year 8 students to the country house of Uppark where they had the wonderful privilege of guided tours of the house as part of their preparation for a piece of creative writing, the climax of their study of Gothic Literature.

Guided by expert National Trust volunteers and Conservation Officers, the students were treated to insights into the House, the family and the work that is undertaken to preserve and conserve the treasures for the future. On their return to College, they read and looked for echoes of Uppark in HG Wells' story 'The Red Room' (Wells both grew up and lived there, and used the settings in his stories and novels.)

The weather set a wonderful atmosphere (foreshadowing, I believe it is called) for a fantastic Gothic experience which is being concluded with the students being engaged in their final writing task, a piece of creative Gothic writing, where they draw on as much of the atmosphere and surroundings of Uppark as possible. Both Mr Bezant and I are now looking forward to some truly thrilling writing, which both we and the National Trust hope will be exhibited on site at Uppark.

Whilst mystery and history were being explored on the windswept, storm battered hillsides of the South Downs, back at the College in our Main Hall 23 students in Year 7 took part in a workshop run by the University of Southampton. Tasks included team activities based around researching different University courses and then presenting back to the group on the information gathered as well as a very competitive ‘beat the chaser’, using questions they had learnt from the virtual tour and the prospectus. The Year 7 students were very well engaged and had so many questions at the end that we ran out of time. The University Ambassadors commented on how well-behaved and respectful our students were, which is great, and also how enthusiastic they were in finding out about Higher Education. It is so important to ignite and nurture this sense of ambition as early as we can with the students, so they can envisage the exciting pathways in front of them as their learning journey progresses apace.

On Thursday the 9th of December the history department took 42 Year 8 students to Fort Nelson. They had 3 workshops based around recruitment and signing up, trench medicine and weapons. The students were engaged and enthusiastic throughout and cadets Archie R and George P led the way when marching and handling weapons. Mrs Masson had planned the trip to be a useful way to introduce some pre learning on the new topic of World War One which the students will be starting in the Spring term. This flipped approach to learning is something that we plan to grow and expand on over the next couple of years.

The enrichment for Year 7 and 8 did not stop there in this first week of December as on the Friday Mrs Clark introduced all Year 7 and 8 students studying French to some French theatre in the form of “The world’s gone French” Zut alors! Qu’est-ce qui se passe? performed by the Onatti Theatre Company. Year 7 and 8 very much enjoyed the performance of the bilingual play, which aims to increase confidence in language learning and builds on known language while introducing new key words and phrases.

It told the story of Keiran, a young boy whose mother buys a jigsaw puzzle of the world from a charity shop, only to find there are some pieces missing. Suddenly Keiran is surrounded by family members who all seem to be fluent in French…

Most classes had been prepared before, enthusiastically practising a scene from the play in class before the performance. The bilingual and visual aspects of the play made it easy to follow and there was a lot of audience participation. The students responded extremely well and were keen to demonstrate their knowledge of the language in a lively and enthusiastic way. 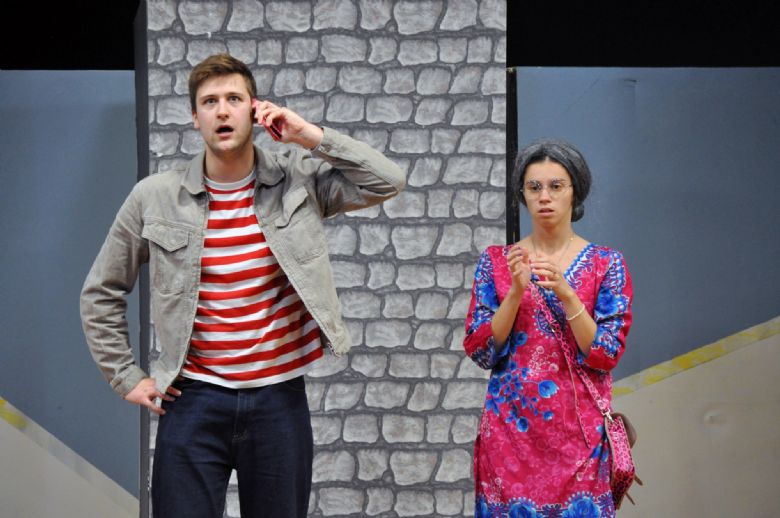 As we moved into the last week of term, I made the decision that we would still go ahead with all our planned events, but we would keep everything as safe as we could. So on the Monday we went ahead with our ‘Girls in Engineering Event’ which 40 of our Year 8 girls had signed up to, despite the visitor from the Women’s Engineering Society not being able to attend due to Covid restrictions.

Mrs Breeze, however, stepped into the breach and with some fantastic creativity and imagination put together an engaging and thought-provoking ‘house’ practical challenge for our budding engineers. The girls were a credit to the College and there were both strong teamwork and problem-solving skills in the practical challenge. The girls deepened their knowledge of the impact of climate change on the planet and showed a genuine desire to explore the ways the College could contribute to overcoming them through innovative proposals. This was undoubtedly a brilliant opportunity and so timely as Year 8 move into the final stage of their option process at the start of the Spring Term. My total thanks to the technology department for facilitating the delivery of the event.

On Monday and Tuesday we were also able to run the Christmas Rewards Cinema for all Year groups for students who had achieved over 80 Commo’s either since the start of term or since roll over in July of the previous academic year. It went down extremely well with all students- despite the fact that the popcorn was replaced with cookies. ‘Elf’ yet again was the film of choice for the students. 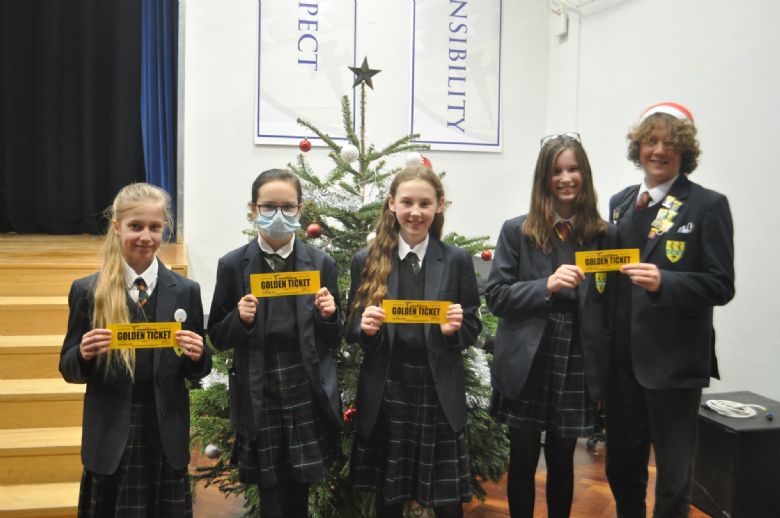 On Wednesday 76 Year 8 students took part in a forensic science workshop led by Bournemouth University. Using their detective skills to work out "who killed RIP the pig" they analysed fingerprints and handwriting, they used their maths skills to work out which direction the blow came from, and their problem-solving skills to look at shoe prints and which suspect they belonged to. All students that took part engaged and really enjoyed the session. It was a great way to link STEM careers to university and to transferable skills that the students learn in school every day, thereby helping to establish that all learning opportunities have significant value.

On Thursday we were ‘blessed’- yes, I do mean ‘blessed’ with the appearance of Santa in his decidedly moth-eaten Santa suit. I am writing to the elves as soon as we are back in January to see if we can contribute in any way at all to Santa’s suit being upgraded for next year. He attended our Christmas lunch, which was an excellent operation run with great skill by Julie and her team in the canteen, and then he very kindly distributed our secret Santa presents for us. To be fair, I think he thoroughly enjoyed his trip to see us and funnily enough students from all Year groups were extremely pleased to see him back this year (despite the quality of the suit!).

The last day of term, thank goodness, saw the return of the Crookhorn traditional panto. Despite Mr Collins trying to cancel it at every opportunity (BOOOO) we persevered and managed staff absence, to get the show on stage for 4 sell out performances (well the students did not have much choice to be fair, but if we had been selling tickets- it absolutely would have been a sell out for each show as there is nothing students enjoy more, than seeing their teachers make complete fools of themselves). This year, the panto was set to the happy, popular and lively tunes of ABBA which got each audience in the mood for a very happy and joyous end of term. After dancing round the hall 4 times to ABBA tunes, I was certainly ready for the end of term. My absolute thanks to Mrs McCaw who co-wrote the panto with Mr O Sullivan and also directed it and did all the choreography. A woman of many, many talents!!!

I also want to highlight here that by the end of term 564 students had taken part in our House Sports competitions across the whole of the Autumn Term. This amounts to 64% of our College population. As more House Competitions come up next term, both sporting and otherwise, I look forward to this figure growing.

So, this time, I feel we managed to end 2021 on a real high, despite all the challenges of the year. It just shows how far national and international science has come as well as our country and our College, that despite the severe ongoing nature of the pandemic, we are able to inject enrichment, enjoyment and fun back into our lives and not revert back to complete lockdown status.

I really do hope that all of our community has been able to enjoy Christmas this year. It is with real hope that we start our new journey into 2022 with the College, and indeed all schools across England being able to open fully, which is a vast improvement on last year, albeit with a staggered start to enable all the testing!