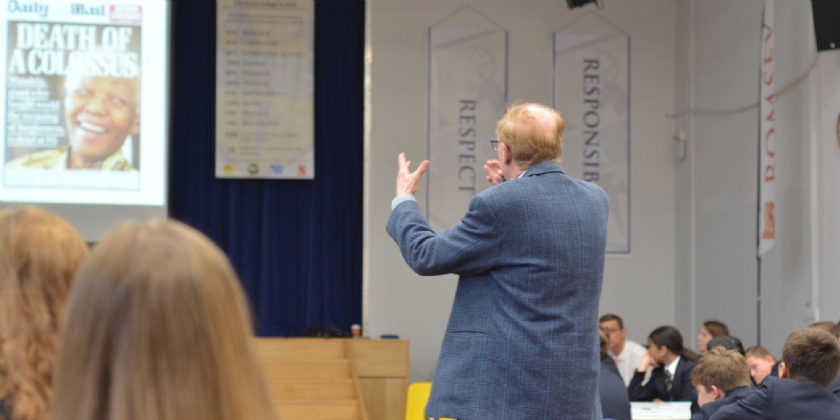 This month we had a visit from an inspirational man called Colin Chambers. Colin was the Chaplin to Nelson Mandela for 8 years whilst he was imprisoned on Robben Island. During this time, he came to really know and understand the man that was Nelson Mandela. For two hours he worked with a wide range of students, informing them on what apartheid was, how it came about and how it came to its extraordinary end on the 27th April 1994. He also talked extensively about Nelson Mandela, and what it was that made this man so exceptional. I thought I had a good understanding of Mandela and the political struggle to end apartheid, after all, I had been a history student studying 20th Century history and politics at Birmingham University during the build-up to the end of this institutional racial segregation. But what I see now is that I really knew nothing about the man, and his capacity for forgiveness and his completely driven desire for reconciliation without any retribution. Nelson believed that the only way forward for South Africa and indeed the world on a bigger scale was to accept each other’s differences, lay the past down and seek a way forward that was to the benefit of all. 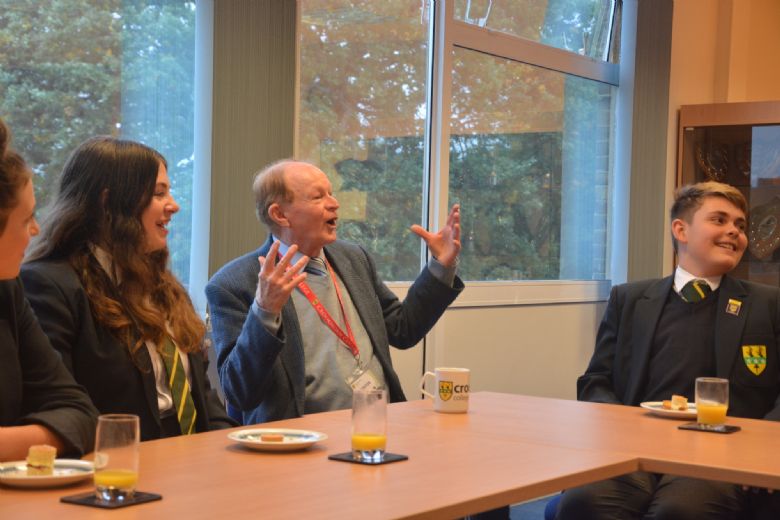 It is thanks to visionaries like Nelson Mandela, that we have progressed as a world community to where we are today; where children can sit and listen to a talk about racial segregation that was happening during the lifetime of their own parents and be astonished that one set of humans could treat another set of humans like that just because of the colour of their skin. Such behaviour is beyond their comprehension. It gives me real hope and confidence that as we educate this next generation, their values are truly rooted in foundations that are so much more to the benefit of all rather than the glorification and perpetuation of mastery of one class or one race.

Colin also focussed on a couple of key quotes by Nelson, that I believe speak to us very well at Crookhorn;

“It always seems impossible until it is done”

“May your choices reflect your hopes rather than your fears”

And finally; “Education is the most powerful tool that you can use to change the world”.

As you might remember, I talked in the September blog about the need to build the resilience of our learners, so they can face the challenge of the new rigorous exams and the quantity of learning that sits behind them, with confidence. I connected this to the need for students to study hard outside of lessons, and not just rely on the learning in the lessons. Many students, specifically Year 11 who feel the pressure the most currently, feel that this independent study is an impossible concept, because of a few factors, such as not knowing where to start or just not having the intrinsic motivation to actually sit down off ones own back to do it. So, we are using this first Mandela quote with them, and trying to break down the concept of independent study into an experience that they can understand and that is not too horrific, so they are willing to replicate it again and again. For their study over half term, I asked teachers to be explicit with the students about what study they wanted the students to do and to ensure that all students have access to the knowledge required. Sometimes as teachers we can assume that a student knows where to access the learning from, but many students at the moment require a more directive hand. 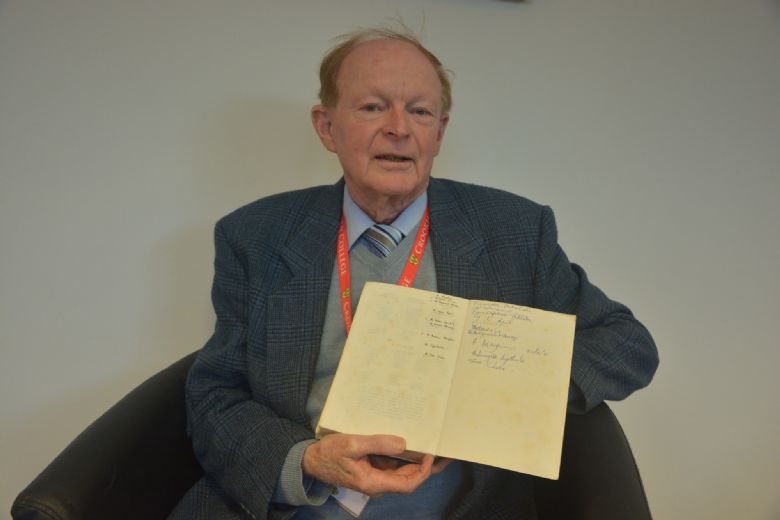 This drive on independent study is not just directed at Year 11 though. The main aim is to get the students fully confident on this, right from the outset in Year 7 so that the 5 years of learning at Crookhorn are totally maximised. I have to say, I am delighted with the way other year groups are taking this on. Study club after school is now regularly full, and the three members of staff I have supporting the students between the library and the study room for Year 11’s are really impressed with the regularity with which many students are now showing up. Year 10 are very keen that I establish a study room just for them now as well, for after College hours, so this is something I need to look into and think about how I can set up. At the end of the first half term, Arundel is leading the way with the top number of attendees to Homework/Study club. Well done Arundel!

I am also really pleased with the numbers of students who are attending extra-curricular learning clubs, such as Language Lounge run by Miss Miller at lunchtimes, Science Club, run by Miss Faulkner on Wednesday lunchtimes, Politics Club run after College by Mrs Masson and of course our Computing and Coding Club, run by Mr O Sullivan every lunch time. Learning comes through many different mediums and the more opportunities that we can provide to the students to learn outside of the classroom and the more the students engage with this, then the more the learning buzz about Crookhorn will grow and grow!

Our campaign on stretch and challenge continues, with three university trips or events in October. A number of Year 7s went on a visit to the University of Portsmouth to launch the Books and Beyond Project, which they will be working on this term.  As part of our programme with the University of Southampton, a group of Year 11s went on a campus visit and Year 9 took part in a workshop here in college, which focused on them considering why people might go to university, in preparation for their campus visit later this half term.

Year 10 had the chance to take part in a Federation event held at Horndean College of Technology, called ‘Operating Theatre Live’. This was our third year of taking part, and the students who went are those who have expressed a real interest in going on to study Science beyond 16. There was the opportunity for the students to work out how much anaesthetic a patient might need, practice their bedside manner on a patient entering the operating theatre, and then the chance to see how a brain works, through the dissection of one from a  pig as well as an exploratory look at the entire digestive system- again taken from a pig, but with huge similarities to a human system. Mr Russell said that the students were absolutely buzzing at the end of it and it had confirmed the ambitions of some to progress into the world of science and medicine.

On the matter of studying beyond College, we had the post 16 options evening for Year 11s and their parents, which again is the third year we have run it, and undoubtedly the best attended we have had. My thanks to Mr Barlow, Vice Principal from Havant and South Downs College for doing the talk and for unravelling some of the complexities of post 16 education in such an interesting and personalised way. I think it is so important that the Year 11s are really beginning to think about their future and the opportunities that lay before them now, as this really helps build that internal motivation to self-study that I referred to earlier on. The Mock Interview day which the whole year group took part in just before we broke up for half term, was another opportunity to encourage this view of life beyond the classroom. Interestingly, many of the employers who came to run the interviews, commented on the fact that students now need to really work on their unique selling point (USP), as so many applications for jobs are quite anodyne these days, and so an application that is going to stand out really needs to capture something unique about the person it represents, so as to get through the first stage and into the interview room. The more, therefore, that students participate in extracurricular life, both in College and at home, the greater will be the richness of their ‘USP’ 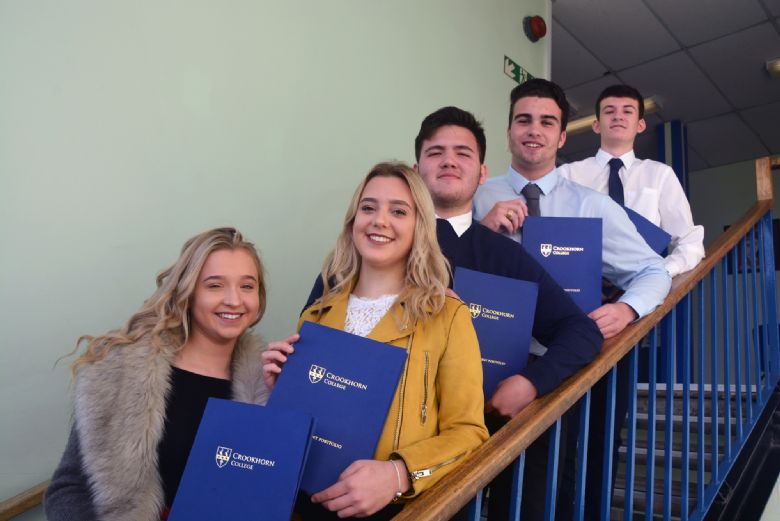 24 students from Years 8 to 11 have just had the enriching opportunity to visit Barcelona at the end of the half term, which culturally and historically is just the most incredible place. Meanwhile, Year 8 had the opportunity on a glorious October day to experience geography field work at the picturesque Hengistbury Head, and yet more students went out with our new Library Manager, Mrs Renshaw to take part in the Hampshire Book Awards. Mrs Renshaw also worked with Neil Fatkin who is the new educational consultant journalist with the Portsmouth News, to organise a press event where 3 students from schools across the Federation came to take part in understanding what it takes to be a journalist. These students have now been tasked with writing up articles for events that happen in their schools with the aim that these will be published in the newspaper. Our first event to be written up was, of course, the visit by Colin Chambers who visited the College the following day. 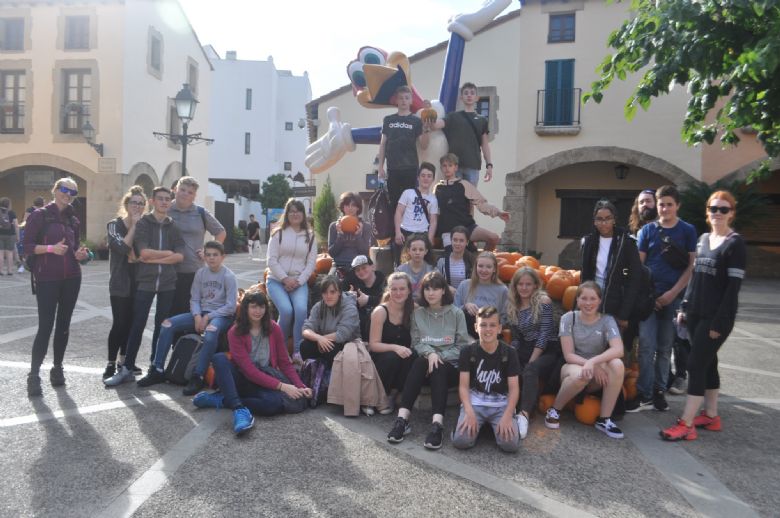 And so, I have come full circle, and we are back to the inspirational man, who started the blog off and the words of wisdom that he shared from Nelson Mandela. As we go into this next half term, which is an incredible 8 weeks long, I certainly shall be very much focussed on; “it always seems impossible until it is done”! I do also think that Mr McGinley might actually kill me if I did not mention that Petworth House were the overall winners of the first major House sports competition of the academic year; the House football competition! Well done Petworth!