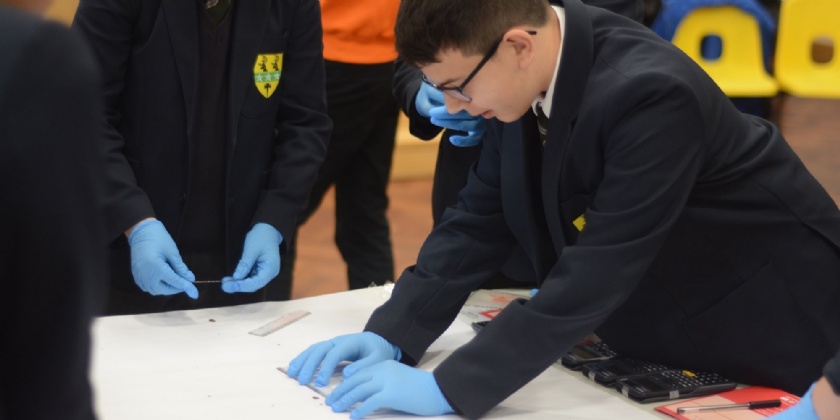 Today Year 9 students put their analytical and forensic skills to the test to solve a fictional murder, as part of the forensic science workshop hosted by Bournemouth University; 'Who killed Rip the Pig'.

From each scenario, students had to conduct a series of comparative tests and decipher who they thought the killer was, in the same way, that real Crime Scene Investigators (CSI's) would.

"My favourite part of today's workshop was recreating the crime scene by analysing blood splatter patterns to determine what type of instrument was used and which hand wielded the murder weapon."
- Year 9 student Karishma

"The pure thrill of investigating who's fingerprints belonged to who was amazing."
- Year 9 student Jazmin

Today's taster session is part of our plan to raise awareness of STEM opportunities within the College and links to careers in higher/further education.

The event concluded with the ambassadors from Bournemouth University explaining which course they had chosen at the university, giving our students an insight into the types of career choices that are available to them.

Thank you to the students and staff from Bournemouth University for hosting such an enjoyable and engaging event.