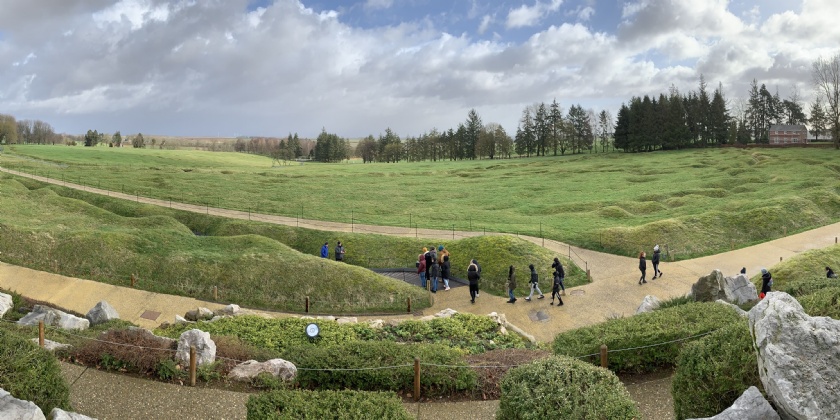 This week, four of our Year 9 students journeyed to Belgium and France for an immersive four-day tour of the First World War Centenary battlefields; as part of a national education programme led by the ICU Institute of Education.

Joined by a handful of lucky students and teachers situated along the South Coast, we headed to Folkestone early on Sunday morning to catch the Eurotunnel to Calais, France. The coach ride from the terminal to our hostel located in the town of Mesen, Belgium went quickly, with students for each school chatting with one another and making new friends.

Our first day started earlier with a trip to the Passchendaele Memorial Museum in Zonnebeke. Here students got to explore replica trenches and dugouts and experience the life and living conditions of ordinary soldiers during 1914. The museum featured an extensive collection of authentic artefacts and replicas; including the many different uniforms and equipment worn and used by our Allies.

“One of my best moments was travelling to the Passchendaele Museum where they had realistic model trenches. We got to understand and picture just how difficult things were; it was shocking. We were very lucky for this opportunity because experiencing it first-hand really makes you think how different times were back in 1914.”

Our next stop was the Lijssenthoek Military Cemetery in Poperinge, where students learned of the painstaking work of the Commonwealth War Graves Commission. Matriculate headstones made from Portland stone lined the site, each with a story to tell.

From here we travelled to Langemark Cemetery, the German commemoration of the war dead. Surrounded by beautiful 100-year-old oak trees, students explored the grounds and learnt about the 44,000 soldiers that were buried here.

Our next stop was to the Tyne Cot British and Commonwealth Military Cemetery, where our students were tasked with researching and locating the memorial of a solider that was local to Crookhorn. Using the register located at the entrance of the cemetery, and a bit of ‘googling’, our students managed to locate William Thomas Beagley, a soldier who served from Havant, and paid their respects.

Our final destination for the day was to the Ypres (Menin Gate) Memorial, which bears the names of more than 54,000 soldiers who died in Belgium and have no known graves. For the last 86 years, soldiers, families and visitors have gathered here to pay their respects by laying poppy wreaths on the steps of the monument. Accompanying this service each night is the Last Post Association who plays ‘The Last Post’ on bugle. This service of respect and remembrance is performed every evening at 8pm and will continue to do so until they have honoured all the servicemen and women that had fallen in the First World War. Our students were lucky to witness this historic event, which was being performed for the 31,677th time since it started.

“My favourite part of this trip is the evening when we went to the Menin gate. Here we watched the last post ceremony and it showed how important every single soldier was to the war and how they still get remembered to this day. We all enjoyed being part of the experience.”

On our second day, we focused on the events of the Battle of the Somme. First, students journeyed to the Beaumont Hamel Newfoundland  Memorial Park, a preserves battlefield where we learned of the Canadian Regiment and their war efforts of 1916. Next, students immersed themselves on the battlefields at the Sunken Lane, one of the most iconic locations anywhere on the Western Front and best known for Army Photographer Geoffrey Malins’ footage of the Lancashire Fusiliers assembling before their 7:30am assault. From here students crossed the Western Front to Hawthorn Ridge to witness the massive crater left from the British mining operation.

“My favourite part of the trip was travelling to the Somme battlefield and visiting the Hawthorne Crater, where Royal Engineers mine under or near enemy lines and pack the end of the tunnel with explosives. After, it will be detonated at a certain time. This mining operation was spectacular to view and reflect on the efforts made by talented and brave Engineers. The steep trek up the hill was certainly worth the view!”

Our day continued with a visit to the Caterpillar Valley Cemetery in Longueval, France, where students were guided through how tactics on the battlefields were quickly learned and adapted by the allies, despite the horrific number of casualties sustained during the Battle of the Somme. Our day concluded with a visit to Thiepval Memorial in Authuille, France. Here our students continued their search to locate the memorials of local soldiers. This is where Private George Thomas Lintott of the 2nd Battalion is commemorated. This soldier holds significant importance to us as he was from Stakes Road, where our College is located. The student quietly reflected on the sacrifice this particular soldier had made and thanked him and the many others for their service, on behalf of the Crookhorn Community.

“My favourite part about the trip was the overall feeling of thoughtfulness and affection towards each individual soldier who fought in the war. It really brings insight and shows the reality behind the figures, focusing on the lives these men and women lived and the freedom they have granted us today.”

On our final day, we travelled to the Australian Corp Memorial that commemorates the Battle of Hamel. Here we heard of the lessons learnt by the Allied command during the attacks in August 1918 and how full artillery warfare was introduced. Mark V tanks rolled into battle, accompanying the Australian and Canadian troops on the ground; while in the air, British pilots soared across the sky, engaged the enemy and turned the tide of the war.

For our last stop, students visited the Armistice Clearing in Compiegne, where the armistice was agreed and signed between Allies and opposition. From here students explored a replica of the secret railway carriage where Allies agreed to take up negotiations for a truce and signed the ceasefire that came into action at 11am on the 11th of November 1918.

After this, it was time to begin our final coach journey and return to the UK.

We feel extremely honoured and privileged to have had the opportunity to experience this tour, which has given our students a uniquely enriching and engaging first-hand look at the events of the First World War that they are excited to share with their peers, friends and family.