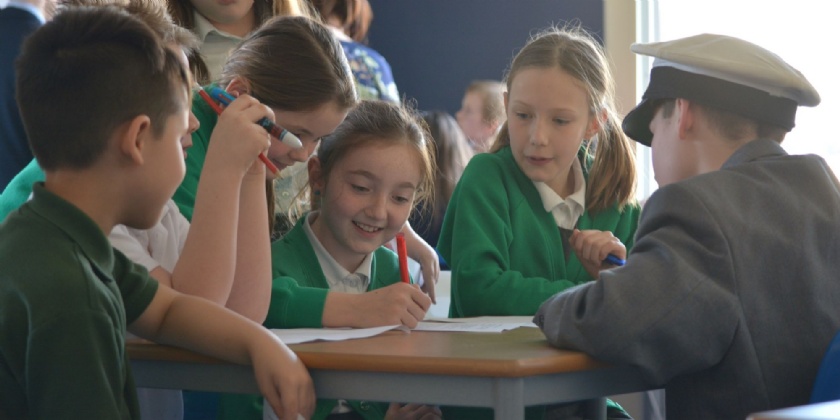 On Friday afternoon the College Library was transformed into a bustling newsroom for Crookhorn College's annual Press Gang event.

Students from five local primary schools took on the roles of roving reporters and worked in teams to create their own best-selling newspaper.
Students took turns in interviewing a number of eyewitnesses and colourful characters, portrayed by our own Year 10 drama students; each of which had an exciting story to tell. From a scientist who discovered a new planet, to the worlds youngest pilot, the young journalists asked a number of engaging questions to get the scoop they needed for their stories.

Once written, each story was printed out and read by a panel of judges, awarding points for the use of storytelling, attention to detail and headlines that would jump from the page and grab your attention.
Choosing a winner from all the magnificent entries was a difficult task, but it was Purbrook Junior School that would be awarded first place this year and be given the coveted Press Gang trophy. Our judges were astounded by all the eye-catching headlines and detailed articles submitted by this year's teams.

Thank you to all our local primary school students that attended Friday's event, the Cosham Rotary Club for supporting the event, as well as to our own students for doing such an outstanding job portraying their characters.

Mr Jones-Taylor, who organised the event had this to say:
'I have been running this event for four years now and I am always surprised by what the students manage to achieve in the time they are given. This year again saw a fantastic display of effort, teamwork and skill from the five junior schools involved. Unfortunately, there can be only one winner and it was Purbrook Junior School who took the top spot. The judges also mentioned Springwood as deserving a special mention. Not only did the junior schools demonstrate a high level of professionalism, but they were also ably assisted by six Year 10 drama students who were all a real credit to themselves and the college. I have been asked by a visiting school to pass on their congratulations to them for doing such an amazing job. Without the Year 10 students, this would not have been such a success. My thanks also go to the Cosham Rotary Club for their support and expert opinion in judging the winners, it was not a job I would want to do. Finally, I would like to thank everyone else for their commitment and help in making this a very successful event.'